Hang on, it’s going to be a bumpy ride! 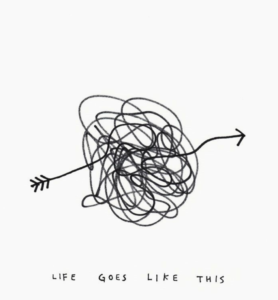 Anyone that knows me can attest to the fact that I’ve always been an open book. The good, bad, and ugly, all is fair game. Of course there’s been times where I questioned my judgement on that, but as I am in a place of complete alignment these days, I’m at peace with the fact that I’ve been open and honest. No closet full of skeletons here, only lessons learned. My evolution to becoming a girl boss is no exclusion. I got a divorce. It was my 2nd marriage and I really thought I was living happily ever after. It lasted almost 15 years. The simple fact of the matter is, there was a disconnection, honesty issues, and the marriage wasn’t able to survive. I’ll save those details for another day. Anyways, we lived on a beautiful piece of property in a refurbished farmhouse, kind of in the middle of nowhere. It was a serene, peaceful, place, full of flower gardens and woods. The thing is, what I remember most about my years on top of that hill isn’t him, or the pretty flowers, or the perfectly remodeled custom designed “just for me” kitchen. No, what I remember most is wandering around that big empty farmhouse and almost constantly hearing my inner voice whispering “what am I here for?” It can only be described as a constant gnawing. I knew deep down there was something more I should be doing. As human beings we are supposed to be comfortable but not complacent. I was fully aware that there was suppressed

energy inside of me and I could totally feel it, but I didn’t know why, what, who, or where I should be putting this energy. During that time I became a jack of all but master of nothing.

Fast forward to 2016. Recently divorced, I made the decision to embark on a journey. Enrolling at the Mequon/Thiensville School Of Esthetics and simultaneously, I decided that would open a business upon graduating. Whew!! Quite a decision! Now, I’m the type of person that when I do something, I jump in, both feet, deep! So, I dug in and began the journey of self discovery and little did  know how much following a small whisper would change my life. 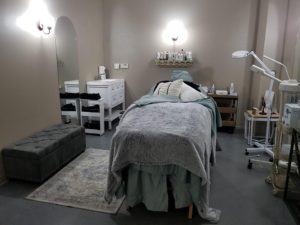 School was not what I expected. Being 47 and having to study was not the easiest thing. I love learning but I’ve always had the problem of focusing. One of those people that can read a chapter out of a book and when I’m done I don’t have a clue what it said. It took all my effort on non-school days to really concentrate and memorize. I’m guessing my aging brain had something to do with that. Anyways, it’s tough, but I kept my eye on the prize, which was my esthetic license. During the last few months of school I began to think about where I would set up shop. There was this building in downtown Hartford, (the city where I attended high school and still live in) that I always had my eye on. It literally was set up perfect, with several rooms, appropriate water hook up, laundry facility, spacious retail areas, everything you’d want for a spa. I began to daydream about it here and there. Finally, push was coming to shove and I approached the owner about wanting to see the space for rent. As luck would have it, at the same time I was ready to get serious about renting the space, they decided it was time for them to sell the building! Wow! I mean talk about timing! Purchasing a piece of property is a big decision and it doesn’t come easy. Really, the process of all the details is irrelevant, what I can say about the entire deal is that mountains were moved for me to purchase the space that has now become Basal Layer & Co. Amen!!!!! 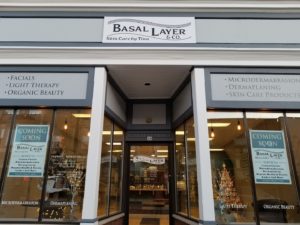 Life has brought me here to share, help, service, grow, nurture, and evolve. Making all the friends I’ve made so far is a big bonus! Many times, through life you have moments when you think it’s the end of the line for you. Try to still yourself and believe that better times are ahead, if you want them. Here I am creating a whole new world for myself. Life is really about following the compass on your heart. It’ll never steer you wrong, it’s a matter of believing it.

I realize life will continue to manifest and they’ll be good with the bad. Learning to welcome the contrast is what I’m going to work on. For, it is in the contrast that you actually learn what you want, what’s important, and what feels good to you. The contrasts in my life I would never have changed and look back on them with affection. I’m not afraid of falling anymore because I’ve learned how to rise and that knowledge is a refillable prescription 🙂

Sign up for our emails and receive special member-only invitations

So, here we are a few weeks into the new year! How many of you have kept your resolutions? How many made resolutions? What definitely helped me this year was not calling them resolutions. I'm just choosing to do what makes me feel best and when I think that way it's...

Who doesn't get sentimental at the close of a year. I don't know about you but just a couple lines of Auld Lang Syne and I'm choked up, I can't help it. I think because the rituals that accompany the season flood my mind with the memories of all the days gone by. Just...